Since time immemorial, women and men have been looking for ways to beautify themselves. However, jewelry is not only part of a fashion trend, but carries with it a certain symbolism. You should pay attention to its meaning. It is especially important to ask if you want to give it to someone as a gift. The Gothic ring has a very interesting history and appearance.

They definitely belong to the group of jewelry that you cannot fail to notice. One of the reasons is their size, details, but also mysterious elements. It is precisely such elements that make people wonder and become interested in jewelry. If you are equally interested, it is time to find out everything about their meaning.

What is the Gothic style?

Pale skin, black hair, dark makeup, and leather clothing are the main characteristics of the Gothic style. However, it can never be complete without minimalist silver jewelry with religious and occult motifs. That is why it is specific and different, but it is also an object of study. If we go back through history, we will notice that this style was gradually upgraded. At the beginning, it looked very stiff, and sophisticated, and then new elements started to appear. A good example is the appearance of corsets and the presence of stronger materials. Jewelry was also subject to change, as in the beginning simple necklaces were worn that represented a particular symbol. Today it is loved and gladly worn, but it is different from the one of the past.

Fans of this style are not only punks and rockers, but anyone who likes to dress simply, elegantly and in black. Many people simply adore this kind of jewelry, because it seems more interesting than the rest. The value when jewelry is taken as a gift is never in the separate money, but in who gives it to whom and what kind of symbolism a particular piece of jewelry carries with it. A sufficient example and the best example of the high, inestimable value that jewelry can have, are the engagement and the wedding rings, but in addition to them, every other piece of jewelry has a specific meaning that tells its own story and can be given as a gift to someone dear and close.

How do I choose a good gothic ring?

When choosing a particular piece of jewelry for a gift. First, make sure you choose a material that you know the person it’s intended for will wear. If someone likes silver and shoes, then choose silver. If, on the other hand, you know that someone likes gold jewelry, do not deviate from it. The only thing that needs to be avoided is jewelry, because the symbolism that it has as a gift is never good.

After you have determined which precious metal will be in the making of the necklace, earrings, jewelry in general, turn to the more interesting part. Think about whether it needs to be more reduced, unnoticeable or something richer and more striking. You can get quite a good idea about look of those types of rings at bikerringshop.com and then you will choose easily.

The most popular Egyptian amulet is the crux-ansata, known as the ankh. He became a favorite among Christian Copts. According to the belief of the Egyptians, as an amulet, the ankh strengthens life force, protects against diseases and harmful influences, drives away demons, dispels spells and enables a long and pleasant life. This tells us that it comes from ancient Egypt, and in the hieroglyphic writing system it represents the concept of eternal life.

It is often a symbol of wisdom, of moving towards one’s destiny. A more popular version appears in vampire movies, because they are immortal. It is known as the Egyptian cross, and the shape can also be interpreted as the rising sun. That is why it symbolizes the marriage of earth and sky. It is probably one of the most popular religious symbols in the world. This symbol in Christianity came into the limelight after the Roman emperor Constantine accepted Christianity. The pentagram is an ancient and natural symbol that can be seen in stars, flowers, crystals, starfish and the extremities of the human body.

It’s a simple symbol to draw, so it’s no wonder it’s used to represent a wide range of values, beliefs. There are also several theories about the origin of the name Baphomet, which is another popular symbol. It is a terrifying creature in the form of a goat-headed idol. Although it looks scary, it doesn’t have to have a bad meaning, quite the opposite.

We must not forget about the skulls, which are the most represented. They can be made of various materials such as metals, glass or wood. They often contain gemstones, which makes them even more interesting. In addition, you will notice bones crosses, bats, ravens and many other elements. 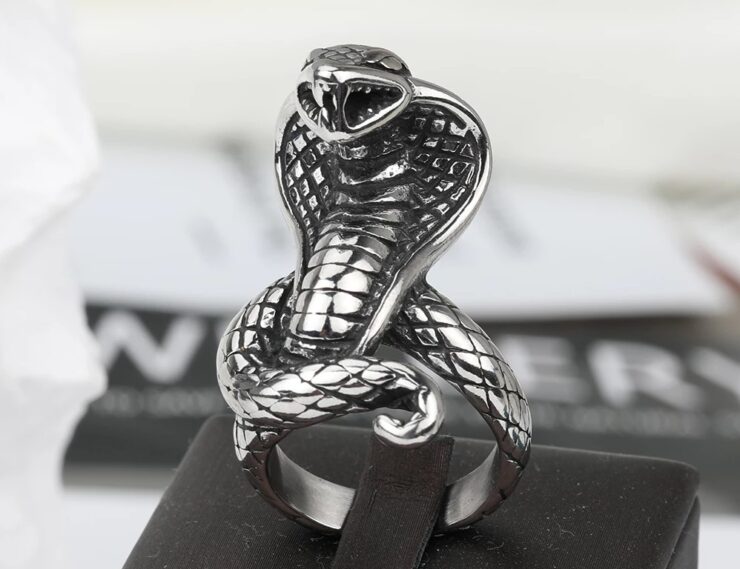 Although snakes may seem evil, they are the most common motifs. This animal has always been intriguing. In Egypt, the cobra attracted special attention, and according to Hinduism, the snake signifies sexual passion. Roman women also liked to wear snake-shaped jewelry, because for them the snake was a symbol of eternal love. Considering that it is one of the oldest and most widespread mythological symbols, there are various theories. That’s why she represents so much. For some, it is fertility, immortality, renewal, and healing, but also evil. We have to mention that this symbol was revered as a god among some people.

In the end, this is an animal that seems both beautiful and dangerous, and it is clear why many people love jewelry with its motif. It is a very complex symbol. We often have a fear of spiders and avoid them in a wide arc. However, the spider is an ancient symbol of creation, creativity and diligence. It is also used as a lucky talisman that brings good news. Its symbolism has a dark and a light side, reflecting its connection to many aspects of life.

With jewelry, you can emphasize your authenticity, love, characteristics, or even present your attitude towards something. Jewelry is not just a fashion detail. Many pieces, such as rings, bracelets, pendants or earrings, have an overt or secret message. The way of giving also means something. So, when choosing jewelry, remember that. This is especially true of the Gothic ring, because it hides many secrets.