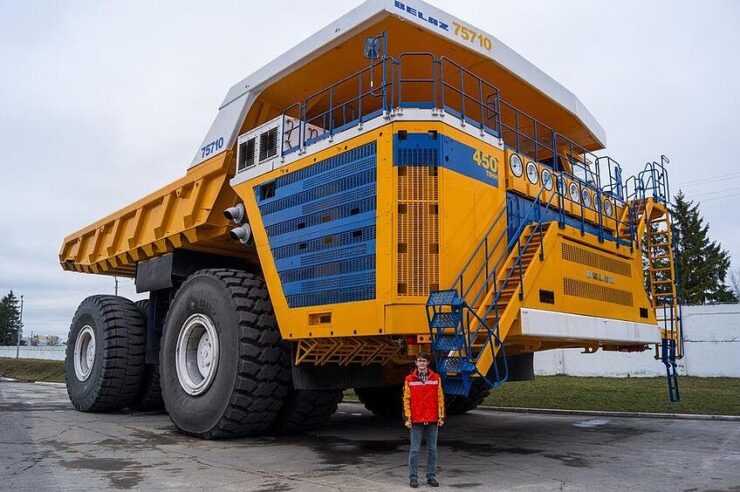 Transport in the mining business is highly demanding. People in the mining business must count on robust vehicles that can carry heavy loads – while guaranteeing a safe environment for drivers. And these vehicles, without any doubt, are huge. But have you ever wondered what is the biggest mining truck in the world?

You’ve probably heard this many times before, but maybe you haven’t thought about how important mining is to any country’s economy. When we mention mining, we must know that it is not only about extracting precious metals such as gold. Other ores are also very significant for this sector and the overall economic survival of numerous countries. With the current economic crisis and the Russian-Ukrainian war, many countries have faced the issue of the importance of mining for their economic stability.

Mining and Energy are Sectors of the Future

The mining sector is one of the most important areas for development and the future – and sustainable mining is crucial for economic development and the environment. We don’t even have to mention that all of this is very important for energy stability, on which daily life and functioning, production – and therefore people’s living standards – depend. Of course, with greater exploitation of ores, modern technologies, and the mechanization we use today also developed. Today, it is not unusual to see giant machines in mining pits, without which we could hardly imagine today’s mines. However, it is not just about diggers, excavators, or cranes. Without mining trucks, dumpers, and good logistics – the whole job would be in vain.

Mining Trucks Are Not Ordinary Trucks

That is absolutely true! Namely, the trucks used in mining are very different from the trucks we meet on the roads. These are modified trucks of large dimensions that often have installed specific machinery such as drills, cranes, etc. Of course, it is clear to us that the nature of the work in the mine is such that these vehicles are necessary logistical help. Some of these trucks work on clearing the terrain, some are used for transferring and moving loads – and some are used for loading or unloading or transportation.

Not so long ago, the mining trucks looked quite different. Today, with the development of modern mining technology, as well as the machinery – we have at our disposal giant vehicles with a large number of different features. Some of them remind us of the famous film Transformers – because they have multi-functional performances, and their size sometimes leaves us breathless.

Giants in the Mines

Mining trucks are extremely big – and, of course, there are good reasons for that. Namely, the heavy weight of cargo transported on uneven, muddy, or dusty terrain in quarries imposes great restrictions on the equipment we can use. Therefore, big and heavy trucks are a necessity and perfect allies even in the most difficult working environments. Of course, every mine must constantly invest in its technical-technology parks, so it is not surprising that some of the biggest trucks in the world can be seen in the mines. The American and Russian trucks are the most famous in this field. However, European companies such as Volvo or Scania are also keeping pace. If you wish to know more about the most powerful mining trucks, you might want to take a look at https://fuchenglhd.com/blog/top-underground-mining-trucks/

And Who Is A Giant Among Giants?

When we talk about mining trucks, it is clear to us that this is a special category of vehicles. We can’t compare these trucks in size or features to any other truck you’ve seen. If you thought that the big trucks on the wide American roads were of an impressive size – we will tell you that they are just average compared to the category we are talking about. Of course, those who operate such vehicles must be specially trained for such work. However, there is a growing tendency of using vehicles that will not be driven by humans – but operated automatically. That further shows how deep this industry has already stepped into the future. However, let’s answer the question of which mining truck is the largest in the world. Who is this giant among giants?

Officially, this is the biggest mining truck in the world! It comes from the former Soviet republic of Belarus, and everyone who had the chance to see it at technology fairs experienced the WOW effect. This truck with a capacity of 496 tons was developed by the engineers of the Belarusian company, who did not think at the time that this truck would get into the Guinness book of records. Namely, this model represents a dump truck with a record carrying capacity.

So far, the biggest truck in the Belarusian factory could carry 360 tons – and machines with this capacity are produced by only five companies in the world. BelAZ-75710 weighs 810 tons and has tubeless Michelin tires on its wheels. Each tire weighs nearly eight tons. Its maximum speed is 64 km/h. This truck is powered by a 174,300cc engine with 2,300 horsepower – while it has a 1,800-liter fuel tank. Such a big tank is also necessary because the truck consumption is 965 liters/100 km when it is in operational condition.

What Other Trucks Are Also In This Category?

Although BelAZ is officially the biggest truck in the world and the largest mining truck, we should not ignore other manufacturers who can also boast of the size, capacity, and performance of their mining vehicles. We will mention only a few of them, such as the Caterpillar 797F, which is currently the second-largest truck in the world and transports up to 400 tons. Its speed is even slightly higher than that of BelAZ and can reach a speed of 68 km per hour.

Terex MT and Liebherr are also trucks with a huge carrying capacity of close to 400 tons – so they must find their place on the list of the most powerful mining trucks. Of course, we must not leave out the underground mining vehicles, which are still dominated by the Volvo company, among others. Overall, these are giants on wheels characterized by power, size, and the technologies implemented into their operability.

The prices of these powerful trucks are measured by a large number of zeros, but the results should still be kept in mind. Therefore, even the governments often get involved in the business of mining companies with large subventions, helping them when buying machinery – because this is where the most common problems are. Investing in this area is large – but it can bring great results and far greater financial returns.